Today, Frank Barger, who is the Elections Administrator for the Madison County Probate Judge’s Office, announced his candidacy for Probate Judge.  Frank was joined by his wife of fifteen years, Jennifer and his eight year old son Grant, who attends Chaffee Elementary School.  Secretary of State John Merrill, who has worked with Barger during his first term, introduced him.  “Frank Barger is an outstanding husband, father, public servant, friend and dedicated Christian.  Any time someone with the skill, ability, and experience that he possesses offers himself for public service, it is important to give him full consideration for the position he seeks because unlike many individuals that seek public office, he would never do so for personal gain.  He will always put Madison County and her people first,” said Merrill.


As Election Administrator, Barger has led the efforts to implement new election laws and standards along with 21st technology in our election process.  He has streamlined the preparation, testing and delivery of election equipment and oversees all election-day operations including 900 workers.  He also developed a comprehensive voter information website for Madison County.  Barger manages the use of federal and state grant resources to improve the overall voting process.


“I decided to run for Probate Judge because I want to do more for the people of this county that I currently serve.  I want to put my conservative leadership and management skills to work in this office.  The Probate Judge’s office is the people’s office.  We all know doing business in the courthouse can be tedious and I want to make sure that the public has unlimited access and their experience is efficient and effective as possible.  I will make sure that tax payer dollars are spent wisely and put to work for the people of Madison County,” said Barger.


Frank, his wife, Jennifer Roberson Barger, and their son Grant reside in South Huntsville.  They are active members of Latham United Methodist Church, where he serves as Vice-President of United Methodist Men and Chair of Communications.  Jennifer serves as Vice-President of the North Alabama Conference of the Northeast District of United Methodist Women and as Latham’s Children’s Ministry Coordinator.  Both are actively involved with numerous activities at Chaffee Elementary School where Grant is a student in the Gifted and Talented Education Program (GATE) and Jennifer serves as a PTA Board Member.  Jennifer and Frank are both active members in the Madison County Republican Party. 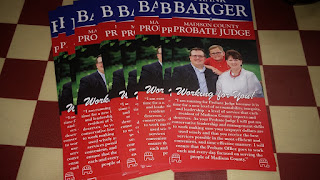 Posted by JobsInBama at 8:51 AM