With a heavyweight endorsement, Frank Barger on Thursday announced his intentions to run for Madison County probate judge.

At a campaign kickoff event in Big Spring Park, Barger was introduced by Alabama Secretary of State John Merrill.

And Merrill's endorsement, the secretary said, also came with his wife's, too. Cindy Merrill celebrated a birthday on Thursday.

"You know very well where she stands with Frank Barger if we've taken time today to come out of Montgomery today to drive up to Madison County and to be able to share with you for a few moments about Frank Barger and why we support him in all of his efforts and activities," her husband said.

Barger is a familiar face in the probate judge's office. He has served as elections administrator since 2011 and has worked as a clerk in the office as well.

Incumbent Tommy Ragland has said he will not seek re-election next year.

"It is in the spirit of wanting to give back, on moving forward on needed improvements that need to be accomplished for you and a desire to serve this community in a greater capacity that today I humbly ask for your support as I announce my candidacy for probate judge of Madison County," Barger said.

Merrill, the state's top election official, said Barger has been a valuable resource in his role as elections administrator in Madison County.

"Frank is someone I would love to come to Montgomery to be the director of elections for the state of Alabama."

Barger pointed to his experience in the probate judge's office as preparing him for the position.

He touted his work in digitizing records and best practices in retaining required records in the probate judge's office and promised to make the office more serviceable to the community.

"As clerk to the probate judge," Barger said, "I have been directly involved in processing more than a thousand cases - whether probating a will to make sure someone's estate is administered correctly or helping an attorney process a guardianship on an emergency basis, I have been in those situations with you. I have been involved with you. I know what you have experienced." 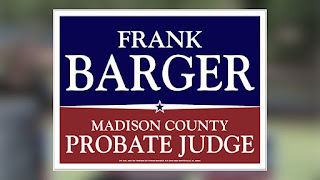 Posted by JobsInBama at 8:50 AM